Our Books on Loan Program:

You can request the following materials be sent to you for use in your classroom. We will mail you the requested item with a return mailer envelope or you may pick up at the Museum during our regular hours. Contact Roz Gibson, Assistant Director for more information or to make a request. We ask that you keep materials no longer than two weeks.

Cartographic References Available For Teacher Use

The Coast Mappers by Taylor Morrison 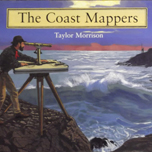 Book chronicles the difficulties encountered by George Davidson and others as they attempted to create nautical charts to complete the U. S. Coast Survey of the West Coast in the mid-nineteenth century.

Everyone can measure an inch, or even a foot, all it takes is a ruler. But how would you go about measuring over three thousand miles of rugged coastline? In 1850 George Davidson was asked to measure and chart America’s entire Pacific coast. It would be no easy task at any time, but in any age before radar or satellites, such a job must have seemed impossible. Despite the obstacles, however, Davidson’s survey was urgently necessary.

The California gold rush had brought a great wave of oceangoing traffic to the West Coast—hundreds of ships sailed the Pacific carrying eager prospectors to California. Without a single lighthouse, buoy, or beacon to guide them, ships frequently crashed into rocky headlands and giant off shore rocks.  By 1850, the situation had grown desperate, so the U. S. Coast Survey assigned George Davidson to chart all the major headlands, bays, river inlets along the Pacific Coast. His survey would be used to create reliable nautical charts to help ship captains sail safely to their destinations. 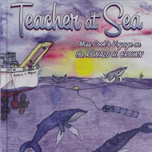 Book chronicles the voyage of Mary Ester Cook, a teacher, on the RONALD H. BROWN.  She had been selected as NOAA’s next Teacher at Sea. She would soon embark on a three week journey on board NOAA’s research ship, the RONALD H. BROWN. While at sea participating in exciting experiments and research, she would email her students daily, send  photographs  and describe cutting edge science.

Maps of the California Gold Region 1848-1857 A Biblio-cartography of an important decade by Carl I. Wheat. 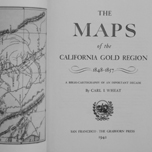 Wheat's Maps of the California Gold Region , 1848-1857, is the definitive scholarly study of maps of the gold rush and one of the most sought-after and respected books about California and the America West. Illustrated with facsimiles of the many of the most important maps of the period it provides its user with detailed historical, bibliographical and cartographical information. 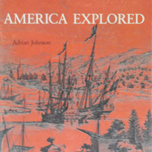 One of the most exciting stories, never before told as explicitly and as beautifully   as here, is that of the discovery and ultimate exploration, of North America. In more than 350 illustrations, many of which are large full color facsimiles of early maps, in Adrian Johnson’s  authoritative text, the progression from the first Viking voyages through the explorations of Columbus, Ponce de Leon, Verrazano, Gomez, Drake, Raleigh, Champlain, Jolliet, La Salle, Marquette, numerous others, to the nineteenth century expeditions of Lewis and Clark, Pike, Ashley, Smith, Fremont and the Mormons is fascinatingly traced. The marvelously detailed ornamental maps,( showing incidentally, the progressive precision of the mapmaker's science) reveal our ancestors’ increasing awareness of a new continent. 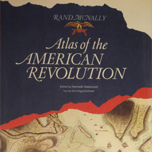 This Atlas is the most unusual and comprehensive volume of its kind. It is truly a unique effort, telling the story of the American battle for independence with the help of priceless maps, many of which have not been reproduced since their original appearance two hundred years ago. Drawn by actual eye-witnesses to the events described, the maps capture the immediacy and excitement of the moment.

The 54 maps in the Atlas are reproduced in full color with a remarkable degree of detail. Substituting for the cameraman of a later era, these maps provide a unique pictorial record of the Revolution from De Costa’s map of Lexington and Concord to Major Sebastian Bauman’s map of the surrender of Yorktown.

Four maps present the theaters of the War. These theater maps, along with a foldout chronological chart, organize the events of the War into a clear and vivid picture of the what, where, and when of the numerous battles.

Columbus and the Age of Discovery, Zvi Dor-Ner and William Scheller

This is not merely a biography of Columbus or an account of his explorations, a book that conveys a sense of Columbus’s story as a fulcrum of social, political and intellectual history. Five hundred years after Columbus sailed out of Spain into world unknown to Europeans, he is for many such a vibrant symbol of energy and success that they name their towns, their colleges, and even their spaceships after him. Yet to others he also represents the double edged nature of much of human achievement, as his legacy includes the decimation of entire New World peoples at the hands of alien disease and European rapacity. This book explores the complexities of the Columbus legend, showing how this one man came to symbolize both the spirit of heroism and the costs of colonization. It tells the story of one individual among forces of great economic, political, scientific, and cultural change, a story of worlds lost as well as found. 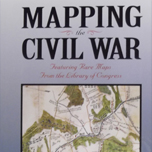 A primary source of intelligence in the Civil War, maps ere as valuable and critical as rifles and cannon.

These collected maps, some never published and many in manuscript form, show us a new face of the historic war.

This book incorporates maps, photographs, and original drawings, to illustrate the war into the major battles and illustrating each battle with critical and beautiful maps from both sides as well as photographs and sketches, it shows what the battle leaders might have seen, and gives us an intimate and fascinating view of the strategy of the Civil War.

Maps and Mapmakers of the Civil War, Earl B. McElfesh This Reference Book is for onsite use only 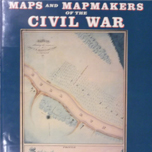 During the Civil War, a good map could spell the difference between victory and defeat. This book collects, for the first time, the war’s most notable, interesting and beautiful maps and tells the story of how they were made.

In the mid nineteenth century, much of the country remained uncharted terrain. But between 1861 and 1865 routes in the East and the West witnessed an  altogether different set of  travelers: the Civil War armies of Lee and Grant, Sherman and Johnston, Beauregard and McDowell, Jackson and Banks, and dozens of  other great and less luminaries of the defining war in  America’s history. By 1865, where the armies had campaigned, hardly an acre was left unmapped.

Maps and Mapmakers of the Civil War is by far the largest and most comprehensive, most beautifully illustrated selection of Civil War maps ever published. Ranging from exquisitely detailed color renderings, to rough pen sketches drawn from horseback, these maps are not only invaluable historical artifacts but works of art. The 150 full color reproductions in this book reveal the delicate tinting, meticulous lettering, color penciling and watercolor effects than make them cartographic masterpieces.